Live VR with interaction trough the use of the 3D VR Viewer by Sketchfab.com

Full immersion into a psychedelic world of colors and motion.

"Turn on" meant go within to activate your neural and genetic equipment. Become sensitive to the many and various levels of consciousness and the specific triggers that engage them. Drugs were one way to accomplish this end. "Tune in" meant interact harmoniously with the world around you - externalize, materialize, express your new internal perspectives. "Drop out" suggested an active, selective, graceful process of detachment from involuntary or unconscious commitments. "Drop Out" meant self-reliance, a discovery of one's singularity, a commitment to mobility, choice, and change. Unhappily my explanations of this sequence of personal development were often misinterpreted to mean "Get stoned and abandon all constructive activity"

(VR) and Augmented Reality (AR) can alter our state of consciousness. At least this is the promise of CYBERDELICS that use external tech-mediated stimulation to evoke out of body experiences and trips. Although the field has been developing over the last 50 years, the recent proliferation of commercial VR and AR devices has driven new attempts to collide psychedelic and consciousness culture of the late-60s with the computer cultures of the 80s and 90s. Immersion in cyberspace as a psychedelic experience. Prematurely hyped during the cyberdelic 90s hysteria, virtual reality has actually progressed in amazing ways as an art form.

Today immersion is fast becoming the key indicator of the efficacy of a virtual reality simulation. Developers are preoccupied with fooling your brain into feeling like you’re actually there. Cyberdelic technologies are fast emerging as an entirely new type of experience. Whilst psychedelics can be unpredictable, CYBERDELICS offer a curated experience for an altered state – one that can be explored in completely safe and controlled way. In the CYBERDELIC space there is no such thing as a ‘bad trip’ – unless that’s what you’re looking for? How far can we go using these technologies and techniques to create non-ordinary states of consciousness? How can the sensorimotor data we receive from the outside world affect our brain?

Is the VR headset the LSD of the new millennium?

Below is a playlist of selected 4D CYBERDELICS

The animations on this page can be viewed with various VR headsets.

For HTC Vive and Oculus Rift, please use WEB VR for Chromium or Firefox.

Open the model and click on the VR button 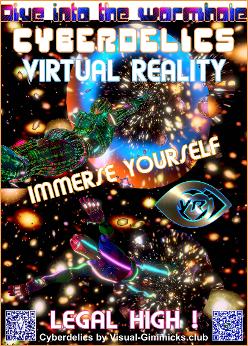 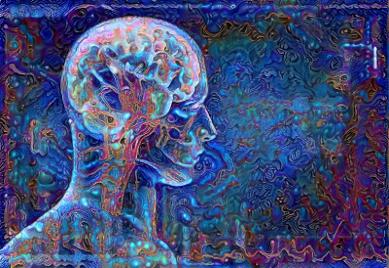